Howard & Sons Pyrotechnics worked closely with the City of Perth Skyworks event team to successfully produce a 30minute Pyromusical fired from 19 barges and in previous years up to 5 city building rooftops wowing a massive audience gathered at various vantage points around the city.

We worked closely with the Skyworks Consortium Committee including council staff, radio and television partners on the conceptual development of the display, as well as produced risk and environmental management plans, obtained all permits, building approvals, transport, installation, initiation and dismantling.

The Australian soundtrack was simulcast live on FM radio station and all firing locations were synchronized to a the master timecode (broadcast by the radio station) to ensure millisecond perfect choreography of the dazzling pyrotechnics bursting on the beats of the music and dancing, across the Swan River and city skyline.

After the 2007 Skyworks we recognized an ongoing issue with the supply of barges suitable for launching of pyrotechnics from the Swan River. We sought out alternatives and through our innovation developed the now established system of using modular floating marinas. We also purchased a number of our own pontoons guaranteeing future expansion for the display.

In 2017, due to a tragic aircraft incident on the Swan River, the Skyworks event was cancelled at 6pm, just 2 hours prior to the fireworks display. The entire Howard & Sons Pyrotechnics crew worked closely with all emergency services, government authorities and the City of Perth event management team to safely remove all 19 fireworks barges and dismantle the pyrotechnic material in accordance with a safe work procedures. An unfortunate emergency situation that tested and demonstrated that our emergency event cancellation procedures were developed then when actually implemented worked safely and effectively.

For more information please contact our head office or your local manager.

See a 60 second showreel of some of our grand spectacular projects.  These include large-scale events such as national day celebrations, special ceremonies, major special events and New Year’s Eve celebrations. 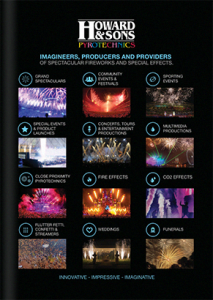 Howard & Sons Pyrotechnics are imagineers, producers and providers of spectacular fireworks and special effects. Download our brochure or for more information please contact our head office or your local area manager.